West Bromwich Albion, famously, are the only Premier League team to have been bottom at Christmas and survived the dreaded drop (although Sunderland could equal that this season). In this feature we take a look at the teams that lie bottom of levels 5,6,7 & 8 in the pyramid at Christmas 2013. Over the coming weeks, until the end of the season, we will follow their progress and see if any can avoid relegation.

The top table shows how the 12 teams, bottom at Christmas, have fared in 2014 so far. The table at the bottom of the page shows the original position at Christmas 2013.

Final positions
Out of the 12 teams who were bottom at Christmas three have managed to pull off the great escape. Huge congratulations to Barrow, Corinthian Casuals and Ware.
Fleet Town, who didn't evade the clutches of the bottom two, did manage to avoid relegation through the resignation of Thatcham Town I understand.
Commiserations to all other teams.
Table as of March 15, 2014 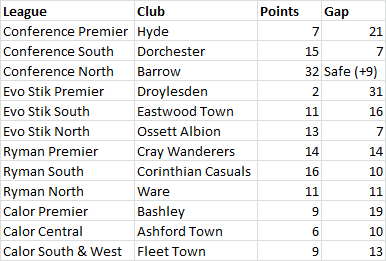 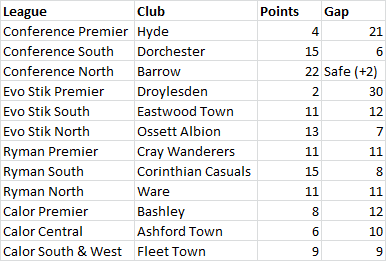 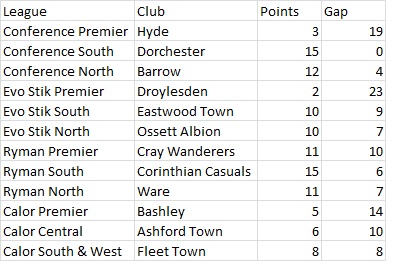